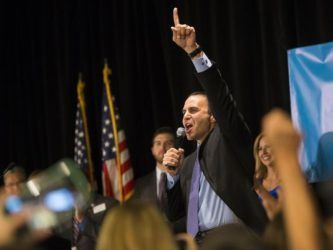 “There’s a new sheriff in town.”

That’s what Paul Penzone’s supporters chanted at his campaign headquarters Tuesday night, when it seemed inevitable that he would topple Maricopa County Sheriff Joe Arpaio from his 24-year reign as “America’s Toughest Sheriff.”

The Associated Press declared Penzone, a retired Phoenix police sergeant, the victor at about 9:15 p.m. Tuesday. It was a turnaround for Penzone, who in 2012 was nosed out by Arpaio, an immigration hardliner and ally of GOP presidential nominee Donald Trump.

“I come from a law enforcement background,” Penzone told his supporters late Tuesday, as he held a strong lead with 60 percent of the vote in. “I pursued this because I want to restore the respect, the transparency.”

“No longer will we be known by the notoriety of one,” he said. “The only division we should see in the community is between those who commit the crime and those (who) are willing to hold them accountable.”

After 10 p.m, Arpaio’s campaign released a statement from the sheriff saying, “Tonight, the people have spoken. And while Ava and I are disappointed in the results we respect their decision.”

“We want to congratulate Paul Penzone on his victory and look forward to working with him on a seamless transition.”

During the campaign, Penzone was aided by multimillion-dollar ads attacking Arpaio, funded by billionaire George Soros through a “dark money” group.

Democrats were banking on Arpaio’s legal troubles to divide Republicans, some of whom are upset at how much lawsuits against him have cost taxpayers, giving Penzone the boost needed to unseat the popular sheriff.

But it was likely Arpaio’s aggressive immigration stance that was his downfall. It alienated him from Hispanic and Democratic voters. And eventually, Republican support split as the enforcement measures spawned a long-running racial-profiling case that led to the sheriff’s criminal-contempt charge and mounting legal costs to taxpayers.

In recent months, he was found to be in civil contempt of federal court for disobeying a judge’s order to stop enforcing state immigration laws. The day before early voting began, he was also hit with criminal contempt of court charges that could send him to jail for up to six months.

Volunteers from around the country bused into Phoenix weeks before Election Day to knock on thousands of doors, seeking to motivate Hispanics and newly registered voters to boot the sheriff from office.

After beating Arpaio piñatas in the park, the group marched toward the Maricopa County Sheriff’s Office’s building, chanting “Arrest Arpaio, not the people.”

Arriving at the building, protesters held up a large “eviction notice for crimes against humanity” banner across the office’s front door while some in the crowd cried with joy.

Penzone was up against a sizable GOP voter-registration advantage in the county. And Arpaio’s campaign recycled an attack he used in 2012, drawing on the protective orders Penzone and his ex-wife filed against each other years ago after an argument that turned physical. A judge dismissed the orders, the ex-wife released an affidavit decrying the Arpaio ads and Penzone sued the sheriff for defamation.

Voters being tired of the constant publicity surrounding Arpaio’s office, to the detriment of a focus on public safety.

“Politics being injected into a law enforcement office.”

The cost of the sheriff’s ongoing legal problems, which come on the heels of years of lawsuits. Pearson said voters appeared to be angered by “the absolute bleeding from county coffers.”

In the waning days of the campaign, Pearson said the Penzone campaign’s own internal polling showed him leading by a substantial margin that appeared to have held as results rolled in Tuesday. Penzone took an early lead based on early-voting ballots, and it was never relinquished.