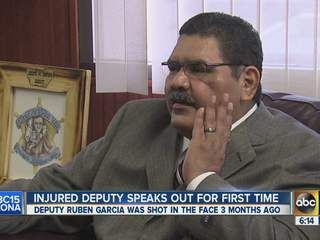 The Fraternal Order of Police, Maricopa Lodge 5, will sponsor an event on Friday, July 17, 2015, to honor and support Maricopa County Sheriff’s Office Deputy Ruben Garcia, who suffered a career ending injury in January 2013.

The event will be held at the Fraternal Order of Police Lodge, 12851 N. 19th Avenue, Phoenix, AZ, from 3 pm to 8 pm. Deputy Garcia and his family will be present. Light food, beverages and desert will be provided. Donation opportunities will be available, including raffle prizes.

On January 8, 2013, shortly after midnight, Deputy Ruben Garcia was working patrol when he stopped a vehicle to investigate a driver, who was reportedly involved in a domestic argument. Without warning, the driver shot Deputy Ruben Garcia in the face and torso, at close range, with a 45-caliber handgun.

After the shooting, an employee of a nearby business performed CPR on Ruben until help arrived. At the scene, Glendale and Peoria police and fire department first responders resuscitated Ruben from near death. Fighting for his life, Ruben was transported by helicopter to the John C. Lincoln emergency room.

Ruben survived, however, the bullets that entered Ruben’s face and torso caused debilitating injuries that Ruben will have to cope with for the rest of his life.

Deputy Ruben Garcia has been under constant medical care since the day he was shot. He has had far too many surgeries, medical procedures, facial reconstructions, jaw reconstructions, vision correction procedures and rehabilitation appointments, than any of us can fully appreciate.

Ruben’s doctors expect that his injuries will require a lifetime of medical care, evaluation and treatment. Ruben still has bullet fragments in his back and a bullet lodged in his neck – too close to major blood vessels to be safely removed.

Not only was Ruben’s law enforcement career abruptly ended as a result of this tragic incident, his plans to provide financial support for his daughter’s college education is now in jeopardy.

On May 31, 2015, after exhausting his sick leave benefits, Ruben was forced to medically retire from the Maricopa County Sheriff’s Office. Ruben served as a deputy sheriff for more than 26 years and had planed to continue his service until his daughter, an honor student, graduates from college.

Ruben Garcia’s law enforcement career was cut short because he chose to do his job and stop a domestic violence suspect, who many believe, had been intending to kill others. Ruben’s intervention and sacrifice probably saved at least one, if not more, lives.

The Fraternal Order of Police Maricopa Lodge 5 event to honor and support Deputy Ruben Garcia, will give 100% of all donations, less actual costs, to the Garcia family to help with Ruben’s recovery and to assist with his daughter’s college education.

We would encourage individuals and businesses to donate cash, raffle prizes, and provide other items to help sponsor this worthwhile event.

All funds raised for the purpose of donating to the Ruben Garcia family must be submitted listing the donor’s individual or corporate name, address, telephone number and, if cash, the amount.